I had the opportunity to attend the annual Schmancy event benefiting the Glenbow Museum here in Calgary. Any kid who has attended school in Calgary has done the field trip to the Glenbow, as it is home to a massive collection of Western and First Nations artifacts that tell the story of how the West was settled. The Glenbow is a gem in the midst of the outdated buildings and convention centre on the edge of downtown Calgary.

Calgary is very proud of its philanthropic side and the event benefiting the museum was fancy and schmancy! It was nice to see the movers and shakers of Calgary dressed in their finest and the Canarioca actually pulled out her vintage fur stole for the evening. The special guest of the evening was the host of the show, 'Tonight with George Stroumbouloupoulis' on CBC. I got to meet and chat with him, and I asked about how he is able to interview people with such ease. He told me that he doesn't have an agenda and he listens! My kind of guy.

The Glenbow will be showing the film 'Bill Cunningham New York" on February 22. I am looking forward to seeing it as Mr. Cunningham is an icon in the street fashion photography world, and a predecessor of all of the street photographers that buzz around outside the tents during Fashion Week.This film is a must see.

Last night I attended the opening of MUSE, a collaboration of photos from local photographers here in Calgary. I was very impressed with the photos of Colin Way. He had a series of moody black and whites portraits, that somehow at the last minute would pop with a hint of colour. His video was looping on a large white wall overhead and the images of the models were beautiful. Local legend Gerard Yunker had a great set of pictures that are truly worthy of a spread in W magazine including a picture that would be a great cover shot. Simple and graphic with a great palette of colour. It was the other highlight of the night. Jason Eng had a set of photos that were sharp and crisp, beautiful lighting and contrast.

Its nice to see that there are talented photographers here in Calgary and I am looking forward to working with all of them in the near future.

This is very interesting information. I agree with a lot of this content. I like this article very much and I have enjoyed reading your points of interest. Thank you.

Lisa Kauffmann
Where do we start? Calgary? Paris? New York? Rio de Janeiro? Why not all of them!!

Find a place to stay in Rio de Janeiro 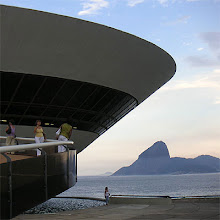